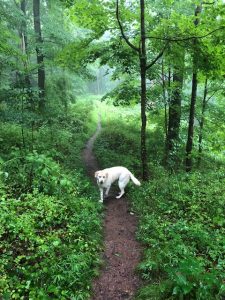 I have been walking in the same rural park for twenty-five years with my dogs, and for a time, I followed a path that took me by two tall straight maple trees. Every day, while nearing them, I found that I would stop and stare in the direction of these trees, as if there were something, or someone there that arrested my attention. I wondered whether it could be an angel, or some other spirit of the forest. Once I stopped, and could see that some trees just behind these two tall trees had fallen and created a cross. After some time I thought I would bring a little gift to whomever it was arresting my attention in this spot in the woods, and brought a small cross of red glass (just an inch tall). I hung it on a tiny chain on one of the trees. The next day as I approached this spot, the sun burst through the woods, bounced off of the cross and hit me in the chest with a tremendously warm, red vibrancy. I stood in this light for sometime, feeling that it had some other-worldly power. It really was tremendous. I felt deeply touched.

After this day, assuming that this wonderful experience was due to the timing of my arrival, and the sun’s angle, I attempted to arrive around the same time in the morning to elicit the same response from the angle of the sun shining on the cross. But, as much as I tried to recreate the conditions of the light display, this phenomenon was never repeated. Throughout the four seasons of seven or so years, the cross hung in the same spot, but never reflected a single shaft of light. I had to conclude that the piercing light I experienced the day after I had offered the gift to the woods had been a sort of thank you.
At the end of those seven years, the cross disappeared. I hope whoever took it found it a comfort.
At some point, during a particularly hot summer I started to walk another section of the park that would allow for my dogs to cool off in a lively creek. I walked this path for another seven years or so, but have just recently altered my course to follow the path that passes the two maples again.
The other day I thought to myself, I wonder if it really was a being in this spot near the trees that I was sensing? An angel perhaps?
When I neared the trees, I was arrested by a leaf hanging by a long thread of an old cobweb. The leaf, twisting and moving on its thread would turn gently, allowing me to see it from all angles, and then move away to the right on an angle that made it look so much like a little bird that it was truly uncanny. I watched this magical leaf/bird/leaf/bird for sometime before I took my phone out to capture its display.