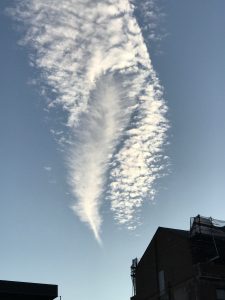 So many of us are fearful of the battle going on in Washington, it feels so very mired in divisiveness and hatred. I understand that it is tough to stay positive of our future. If one is too hopeful of things coming right, one risks being seen as naïve, as not following politics closely enough. It is difficult to keep one’s faith alight when there is so much news that frustrates, infuriates. I understand, but at the same time I continue to believe that the progress of mankind is inevitable, and I hold on to the belief in the ultimate unfolding of the good and noble spirit of this country. One notion that keeps me afloat is the belief that there are beings, (let’s call them angels) who watch over the souls of nations. I like to try and picture our country’s grand angel, hovering over us, loving us, guiding us.

Two years ago, while talking to a friend on the phone who lives in New York City, I went to a despairing place around the apparent narrowing of our country’s generous spirit. I lost my hope for a moment, and so in turn did my friend. We finally hung up from the exhaustion of our shared despair. An hour later, exactly five minutes apart from one another, we sent each other photos, which we had just taken of the sky over our homes, (one hundred miles from one another). Each image was of an unusual cloud. My friend’s photo revealed a magnificent feather in the sky over Manhattan and my photo was of what looked to be a grand spirit coming down from the heavens to kiss the ground.

We had spoken in the past of the idea of that an angelic being might be employed to watch over us. We were both at least willing to believe that The United States had such a guardian. We were truly lifted.

At the risk of being perceived as too trusting, I encourage you to try and keep the faith in the good spirit of our nation. We will come through this.